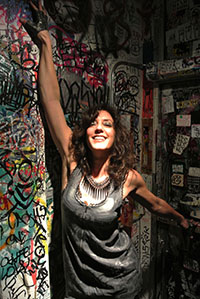 Valentina O is an eclectic and multifaceted vocalist who has not only appeared throughout the United States as an opera singer, actor and performer for companies such as San Francisco Opera and New York City Opera, but whose voice has also been heard in numerous soundtracks for television, film and commercials for Time/Life Warner, IMAX, and Garfield, as well as on multiple CD projects for recording artists, and on the Tonight Show with Jay Leno.

Valentina started her musical odyssey in Ohio, first listening to country music on her Bakelite bedside radio, and acting out all the parts to the original Broadway cast recording of West Side Story in her bedroom, until she discovered Jim Morrison and the Doors late one night on the same Bakelite radio.  From then on, she was determined to be a rock star, and starting playing guitar, writing songs, and singing in bands. After a four year distraction of a Mechanical Engineering degree from Temple University, Valentina moved to San Francisco and attended music school at San Francisco State University, where she began to develop a strange love for the obtuse world of opera singing.

Upon finishing school, Valentina became the founding member of,  performer, and award winning arranger for the San Francisco-based acapella cabaret group Screaming Divas, winning the award for best vocal arrangement for her acapella take on Ravel’s Bolero in 1993, as well as top honors in the Beyond Category for the SF Weekly in San Francisco in 1994.  It was during this period that Valentina began experimenting with non-traditional vocal sounds, and realized one of her life long dreams of performing at the Fillmore Auditorium, as well as performing on MTV and the Tonight Show with Jay Leno.  From there she launched her opera career, which brought her to the concert halls of the San Francisco Symphony and San Francisco Opera, to New York City Opera.

Bitten with the composing and arranging bug yet again, Valentina recently wrote, arranged, and recorded her World Peace Anthem entitled Peace on Earth with Viktor on piano, performing it live at the Seattle Center September 11, 2011 on a simulcast webcast to over 50,000 listeners, donating 40% of all proceeds of sales to global peace organizations.  She is currently at work producing, writing, and arranging her original, electronic music project Nymphya, and continues to champion contemporary classical, opera, theater performance, and avante garde music.